This week we post two letters by Writing It Real members about why they have or are writing their books, one by member Desiree Woodland to the people she hopes will read her book because of their contact with young people suffering from mental illness and the other by member Sheila Murphy addressed to her deceased mother about writing a memoir to tell her mother’s story. Both letters are extremely moving. They demonstrate why telling our stories is essential for informing others from our own experience.

I hope you will leave comments for the authors at the article’s end.

And please note that we have two more weeks in March to post your letters on Thursdays, letters that explain why you wrote, are writing or want to write the book you have in you to write. Read this week’s post and posts from the two previous two weeks for inspiration. Then write your letter and send it to me via attachment or in an email using the contact form.

Dear Parents, Educators, and Gatekeepers Who Work with Youth by Desiree Woodland

Dear Parents, Educators, and Gatekeepers Who Work with Youth,

I remember the day so clearly. I didn’t understand what was going on with my son. He was pacing like a caged animal, mumbling to himself about how stupid he was to have applied Neosporin to a cut on his leg.  He was worried about going deaf because of it. He said he needed to get in the car, drive to Mexico and drive off a cliff.

I was afraid and frantic. I ran to my neighbor’s house to ask her how to help my son. She was sorry, she said,  because she had seen signs of mental illness earlier in the week when Ryan had done some yard work for her.  Her own son was about Ryan’s age when he was diagnosed with schizophrenia. I could not imagine that was what was wrong with Ryan, but whatever it was he needed help right away. I didn’t understand but was grateful that she made an appointment for me with her therapist.

Therapist – not a word in my vocabulary.

Lately, Ryan had been acting strangely. He had been preoccupied with a delusion that he was going deaf despite hearing assessments that proved otherwise. He had built an elaborate device with lasers that were supposed to fix his ears…. Even this did not alert me to mental illness because that word was not in my vocabulary either.  I just wanted a different name for what was going on with my son.

He was admitted to psychiatric emergency services, placed on medication, and instructed to attend group counseling. He refused the counseling. Oh, I wish I had made him go. This was my introduction to the psychiatric world.

My heart goes out to parents whose children will be diagnosed with a mental illness ( 1 in  5) who have no prior knowledge or only stigmatized and stereotypical ideas about what mental illness is.  Mental illnesses like depression and anxiety are common and if symptoms don’t resolve after 2 weeks it is an indication that the child may need an evaluation.  Symptoms range from mild to severe. Ryan was diagnosed at 24 years old, but with hindsight, I see signs of depression during his last years in high school.  Many parents want to think this is only typical growing pains or arrested development perhaps, but nothing as dark as mental illness. What is mental illness anyway? Adolescence and young adulthood transitions are often fraught with self-doubt and questioning, and as parents, we too often sit tight and just hope they will grow out of it.

I Still Believe is a memoir about the hard learning and recognition of my son’s mental illness, the journey of grief after his death, my struggle to find faith again, and the painful acceptance of becoming a suicide loss survivor. I know so much more now. How do we make it okay for youth and young adults to talk about struggles without shame? How to alert parents to the obstacles that may be preventing their child from thriving?  How to reach the youth who need to hear that there is no shame in having a mental illness?

Through Ryan’s journals, we learn about his struggles — the ones he was too ashamed to say out loud.  I share them in the hopes that the stigma and stereotypes of mental illness can be removed so those diagnosed with a mental illness can get the help they need before it becomes chronic, serious, or ends in suicide.

We need to be able to share a common language. Not from a weakness or shame-based perspective, but a truth-based perspective- it is a brain illness. Nothing is taboo. Many factors play a part in a person who takes their life, but most were struggling with depression or anxiety. Suicide can be prevented, and treatment for mental illness works, but only if it is recognized.

So, to the parents, the educators, and gatekeepers who work with youth, it is my sincere wish that I Still Believe will provide insight as you help a young person who may be struggling and is just too embarrassed to talk about it. And to the survivors of suicide loss, may this book be a balm to your aching heart.

With so many in my heart,

Letter About Memoir I’m Trying to Finish by Sheila Murphy

You sang “Ireland must be heaven,” though your mother fled from “Pauper’s Row” in Kenmare at age 16. The memoir I’m writing, A Long Way from County Kerry, begins with her story. I can see the end, but it’s not there yet. You modeled quiet persistence and faith. I need your help now.

When it snowed, you would stand at the tall window of the house on Green Street, your voice hushed, almost chanting: The snow had begun in the gloaming / and busily all the night / had been heaping field and highway / with a silence deep and white….

Hearing you recite poems memorized when you were a child made me a lover of words and reading. You were first in your family to graduate high school. You cheered when I had scholarships to college and graduate school and became an English teacher.

When I left teaching and had four children in five years, my need for mothering was sustained by your weekly toll calls—an extravagant gift for your only daughter in those lean and lonely years. By then you were a widow, living alone in another state, working as a secretary in our town library. You encouraged my litany of everyday challenges and wanted to hear about each of your grandchildren. You sent autographed books when authors of children’s books would speak at the library.

You shared my delight at finding a dream teaching job, teaching seventh grade English, half-time when our youngest started school. Our happiness was shattered when you fell and broke your hip just before school began. You told the surgeon, “If you find something, I don’t want to know.” You knew he would “find something.” He and the oncologist agreed to a fiction you’re your chemotherapy was medication for “a blood deficiency.”

When you died of lymphoma six months later, I was 36 years old and bereft. The words “cancer” and “metastasized” were never spoken. Stubbornness. Silence. Family traits.

The day after your funeral, I returned to a class of disruptive seventh graders who accosted me, demanding to know: “Where were you?”

“My mother died. Last week we started The Yearling. Let’s begin where we left off.” We escaped into the backwoods Florida of Jody Baxter and his orphaned fawn— until the chapter where Jody learns his disabled friend Fodder-wing is dead and visits the family.

Jody’s throat tightened as though a rope choked it, Fodder-wing’s silence was intolerable. Now he understood. This was death. Death was a silence that gave back no answer.

I couldn’t read another word.

Well, your death, Mother, and my grief turned that class around. Those unruly twelve-year-olds rushed up to my desk, surrounding me, and hugged me. We began a healing year, and I taught English for decades.

Parenting and teaching left no time to write anything but lesson plans. When I called or wrote to cousins, though, I took notes and saved their letters. Jack and Anne were older and had lived downstairs from our grandmother. The silence of your death made me want to learn about your family, to ask the questions I never thought to ask.

Jack reminded me that you had served in the Navy in World War I. He sent snapshots from an album dated 1918. You were posing with other young women and men, all of you in Navy uniforms. At age 19, your smile is radiant. I never saw that carefree look.

Jack suggested I write to the National Archives. I received two folders of your military record and postwar civil service. Most pages were forms with routine data. Your distinctive flowing signature on many pages, though, like your voice in my memory, made me smile.

Fast forward to my post-retirement teaching. For fifteen years I led memoir-writing workshops for senior citizens. We wrote from prompts, sharing memories and ideas, and I accumulated computer files of vignettes about your family. Also, during those years, I read and took notes: about the history of post-famine Irish immigration—your mother’s story, about Boston during the time you were a young adult: World War 1, the influenza epidemic, the women’s suffrage movement, Prohibition, the Roaring Twenties, and the Great Depression. Especially, I read about the World War I Yeoman (F) movement that you were a part of.

By 2018, I had a title, A Long Way from Country Kerry, and a four-part structure, for your story.

Parts 1 and 2—your mother’s story, and yours to the end of World War I—are completed. Your granddaughter’s graphic designer friend printed a proof copy, formatting the pages, placing snapshots within the text, and poems at the end of each part. I wish I could give it to you.

In Part 4, the last part, from 1931, the year of your marriage and after, your memoir blends into mine. That part is taking shape from all those vignettes I wrote.

Part 3, 1920 – 1931, is hardest. I know so little about you in that decade, from the end of World War I until you married. The cousins remembered little about you during that time. Your second National Archives file has routine facts and figures.

So, Mother, I’m trying to imagine you in the Boston of that decade. You were in your twenties, the age your oldest great-grandchildren are now. Also, I’m placing you within the broader story of the Yeoman (F) program—a struggle for women’s rights that is little known but should be—a story that you lived.

In 2019, my diagnosis of clear cell endometrial cancer was followed by surgery, radiation, and chemotherapy. Now the cancer has metastasized—words you wouldn’t use—but it is “small and treatable.” Surgery isn’t an option, but another round of radiation started this week.

Consider this, Mother. Cormac, age 16, your youngest great-grandson, for my 86th birthday last week, made me a card– cartoon figures, of course—plus a quote from Shakespeare: With mirth and laughter, let old wrinkles come. Your love for language lasts. And so will your life story. 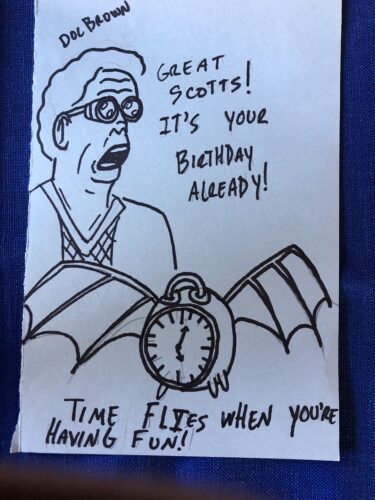 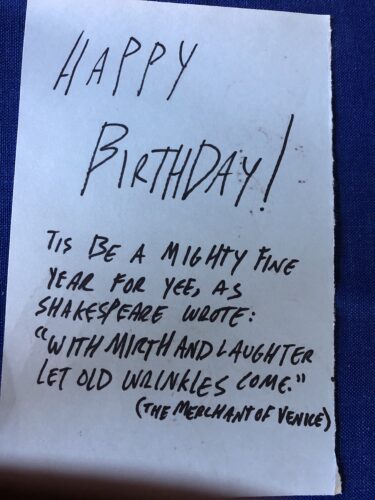 With love and prayers,