My enthusiasm knew no bounds: I was going to start first grade, in a school in America!

After years in Lahore, Pakistan, where my father, a surgeon, had helped start a hospital just after World War II, my family of six was starting over in my father’s Midwestern hometown. Our planned short visit had unexpectedly become permanent. The family doctor examined the four of us children, ages 2 to 12 — all fine, but also underweight from too many bouts of dysentery.  We would not be allowed to return.

My older brother, fluent in Urdu, sported a British accent. My shy sister missed her best friend back in Lahore, and my toddler little brother was so culture-shocked that he would respond only to the Urdu spoken by his ayah. My family sat at a big reunion dinner with our Dutch cousins, who watched with amusement as we spooned sugar into our glasses of milk. Cows’ milk tasted sour. We preferred buffalo milk.

Actually, we preferred Pakistan, where we played with the children of our servants. They taught us how to make kites, which flew high over the open fields. We squatted together playing marbles, using our fingers like slingshots to blast our opponents’ cats’ eyes to smithereens.

To escape the unbearable summer heat, my father would drive the family up into the foothills of the Himalayas, where we camped out with other families in a primitive compound. We children chased butterflies and parrots, spotted monkeys in the trees, and rode donkeys for treks up the steep forest paths. Life in Pakistan was free and full of adventure.

My widowed grandmother gracefully made room for us in the modest city home her husband had built for her, the house where my father grew up. Across the street rose the imposing brick elementary school, where I was soon to start first grade.

In Pakistan, my mother refused to go along with Lahore’s British custom of sending ex-pat children to Indian boarding schools at a young age; she was having none of it. Instead, she brought teaching materials for all the elementary grades with her and extended an invitation to the children of other ex-pats in the community to join her home school. Our classroom soon expanded by a handful of other children, and my mother, who had no formal training as a teacher, went to work. Our long hallway invited roller skating. Along its walls, we drew a huge map of the world, illustrated with lots of birds and animals. My mother rolled up the rug in the living room, started up the record player, and said, “Move the way this music makes you feel!” Years later, when my mother’s young students went on to conventional schools, almost all of them skipped a grade, just as we did.

If my mother’s school in our English bungalow style house in Lahore was fun, then surely school in that big building full of other children my age would be even better! I dressed for action on my first day: sturdy overalls, a plaid shirt, and my scuffed Buster Brown shoes. My blond hair was clipped back and cut short by my practical mother.

I don’t remember who escorted me that first day to my new classroom. The building smelled of wood and polish, with wide steps, and a big hallway. I’d never seen so many children in one place. Inside my classroom, wooden desks waited in neat rows, and a knot of girls stood in one corner. Why were they dressed for church? Pastel dresses, shiny shoes with little straps, and ribbons in their hair. The girls were staring at me as I stood alone, hesitant, in the tall doorway. Then an angel with white hair stepped forward and proffered a hand. “I’m Miss Lolly,” she said softly. “I’m your teacher. I believe I also taught your father, my dear.” I took her hand, and she led me to a seat in one of the desks. My American education had begun. 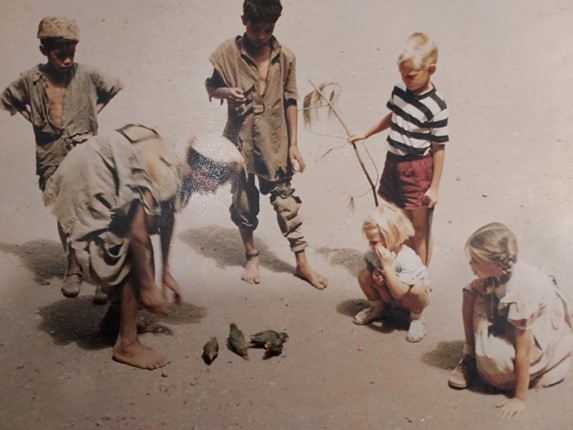